SBJ photo by Eric Olson
The shuttered Meek’s Lumber store on East Sunshine Street may get a new retail tenant.

Several months after City Council rezoned 8 acres at the southwest corner of Lone Pine Avenue and Battlefield Road, the prospective buyer has backed out of negotiations, those familiar with the deal say.

Last year, an unnamed developer planned to build medical offices at the 2700 E. Battlefield Road property, contingent upon the rezoning to general retail from single-family residential.

“The previous buyer is out of the picture,” he said, “but there are other people still looking at it.”

The unnamed buyer was negotiating with the Carson family, who owns the property through Briarcliff Investments LLC, as well as a private residence to the south. The residence was not part of the rezoned property.

The rezoning bill approved by council Nov. 5 was amended twice to limit the development’s scope, with residents in nearby Galloway Village vocally opposed to the development. They feared a change to the character of the neighborhood.

With the former buyer no longer involved, the property could see a change in direction from office space under a new owner.

“It’s a good fit for commercial opportunities and great for office function as well,” Butler said. 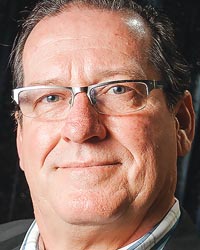 Geoffrey Butler: There is still interest in the East Battlefield property.

A rezoning bill to pave the way for a second Eden Village was opposed by nearby property owners during Springfield City Council’s May 6 public hearing on the bill.

Applicant Jet View LLC seeks to rezone 5 acres at 3303 W. Division St. to a commercial service district from light industrial. Six miles to the east on Division Street, Eden Village is a tiny homes development for the homeless created by The Gathering Tree. Development organizers envision a west-side Eden Village to complement the first.

“Eden Village plans to build multiple Eden Villages throughout town in each and every district to house disabled people that are currently sleeping on our streets,” he said.

Those opposed to the current rezoning say the development would not fit well because the land is surrounded on three sides by industrial and manufacturing districts, among other concerns.

Lee Viorel, an attorney at Lowther Johnson Attorneys at Law LLC, representing nearby property owners, was among the five speakers in opposition.

“While we applaud the concept of dealing with homelessness in the city, it’s our position that to attempt to deal with it at this location, 3033 W. Division, is a mistake,” he said.

Aaron Greer, owner of Faith Paving LLC at 3244 W. Division St., said the area is noisy and dusty, which does not lend itself well to another Eden Village.

“I don’t understand why the zoning would be appropriate for the type of businesses that are around there,” he said. “They’re wanting to put in a residential community right here, and that is not appropriate.”

According to minutes from the Springfield Planning & Zoning Commission’s April 11 meeting, Jet View officials told commissioners they intended to develop the site for a recreational vehicle park. Greer believes that was an intentional misleading of the development plan.

“I feel like that Eden Village is using loopholes in the law to apply for commercial services – an RV park – but it’s not going to be an RV park,” Greer said, also pointing to safety and property value concerns.

Council is scheduled to vote May 20 on the rezoning.

On the east side, Eden Village has 31 housing units.

Eden Village provides housing to the disabled homeless through a selection process for a portion of their monthly earnings, according to past Springfield Business Journal reporting.

The 400-square-foot homes are meant to be temporary housing.

Other rezoning bills before council are for a former Meek’s Lumber Co. store at 3250 E. Sunshine St. and 8 acres at 2745 S. Maple Leaf Lane.

The applicant for the Meek’s property, Sunshine RE Holdco LLC, seeks to rezone the 2.39 acres to general retail from Planned Development No. 9 – a designation that only permits a lumberyard on the property.

According to Missouri secretary of state documents, Michael Meek is listed as the authorized signatory for Sunshine RE Holdco, which registered in mid-2018. In October 2018, the Meek family sold the business to two private investment firms in California and later six stores, including East Sunshine, closed in a consolidation effort, according to past SBJ reporting.

Representing the applicant, Geoffrey Butler of BRP Architects said there is a buyer lined up for the property.

“We’re trying to rezone it to general retail so that it can be marketed, sold off and used,” he told council.

He declined to identify the prospective buyer.

Councilmen Mike Schilling and Richard Ollis worked together for an amendment to the substitute bill, which aligns with the draft definitions of schools, churches and day care centers.

The Schilling/Ollis amendment would set the separation requirements for medical marijuana dispensaries and other facilities at 1,000 feet from schools and 200 feet from churches and day care centers.

Day care centers would have to be state-licensed to fit the definition and churches are defined as permanent buildings regularly used as places of worship, Ollis said.

The latest amendment aims to change the measuring standards and definitions in a section that was left out when the substitute bill was prepared, said City Attorney Rhonda Lewsader.

It also adopts the amendment council approved on April 8 that would allow medical marijuana facilities to operate 24 hours a day.

The amendment passed 8-1, with councilman Craig Hosmer in opposition.

Hosmer followed the amendment with his own change for operational hours to be between 6 a.m.-10 p.m. Council voted 7-2 in favor of Hosmer’s amendment, with Schilling and Mayor Ken McClure in opposition.

Council then voted to table the substitute, amended and original bills until the May 20 meeting.

The new rules would require a $5,000 annual permit to operate, posted notices of rates and fees, and a guide to alternatives, according to city documents. Those operating in violation, if approved, would face up to a $500 fine and/or 180 days in jail for each day of violation.

Councilman Abe McGull said the bill needs time for study, and his motion to table the vote until June 17 passed 7-2.

“One of my concerns is we’re targeting a certain business,” he said.

McGull sent the proposal to a council committee for review before the June meeting.

“The last thing I want to happen is a $5,000 tax be passed on to individuals who can least afford another few dollars,” said Councilwoman Phyllis Ferguson, who voted in favor of McGull’s motion, citing concern with the poverty impact in north Springfield.

As one of the two votes against delaying the action, Schilling said he thought the bill was ready to be placed in front of voters.

“I believe it’s a violation of the social contract, frankly, of doing fairness in business,” he said.

Hosmer also was opposed to the tabling, noting he’s had a prime view of the city’s battle against poverty during his six years on council.

“If people are being charged 400% interest, if that doesn’t exacerbate the poverty problem, I don’t know what does,” he said.

If council approves either bill, it would go to voters for acceptance of the $5,000 annual business license fee.

From the Ground Up: Commander Financial complex

Financial advisers: No need to panic amid coronavirus fears

SBJ.net Poll
Has your business conducted layoffs or furloughs due to COVID-19?
sbjlive videos

The Missouri Department of Labor has a Shared Work Program, which is a lay-off aversion program for businesses faced with a reduction in available work. Duration: 2:23

Richard Ollis, CEO of Ollis/Akers/Arney, says there are analogies between being deployed in the military and current events. Ollis says he learned some tricks of the trade during his three, seven …

Chrystal Irons, director of the Missouri Small Business Development Center at Missouri State University, says they have created a landing page of resources for small businesses. The website is …

Sarah Walters, organizational leadership coordinator with Evangel University, says the role of a leader can be tricky. Recognition of leadership skills often comes with many requests for assistance. …

Elizabeth Wente, Partner with Spencer Fane, LLP, says “The Remix,” by Lindsey Pollak is a great tool for managers. She says the book provides perspectives for younger generations and the more …

Buddy Webb, principal architect with Buddy Webb & Co., says though maintaining a staff of primarily licensed architects and those seeking licensure is against the current industry trend, they have …

“It’s much less about being shackled to your desk and more about going, where are you going to do the best work? We trust you’re going to get it done,” says Jordan Morgan, iOS engineer with …

Sam M. Coryell, President of Coryell Collaborative Group, says in order to grow outside Springfield they needed to reorganize their five businesses under one company. This allows them to control …