SBJ file photo
Greg Burris is now leading Give 5 under United Way of the Ozarks.

Burris now at United Way after Give 5 changes ownership

Decade of Leadership: Springfield’s city manager reflects on his tenure 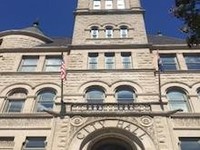 United Way of the Ozarks hired Greg Burris to lead the Give 5 program after Springfield City Council recently voted to transition the initiative to the nonprofit.

Burris, who stepped down as city manager on June 30 after a 10-year term, joined United Way on July 9. He serves as executive in residence and executive director of Give 5, according to a news release.

As the leader of Give 5, Burris works to connect retired or nearly retired baby boomers with volunteer opportunities. Give 5 has graduated two classes of volunteers, according to past Springfield Business Journal reporting.

“Greg’s long history with the Springfield community and his knowledge of the Give 5 program makes him the ideal fit for this position,” United Way of the Ozarks President and CEO Debi Meeds said in the release.

Council voted during its July 2 meeting to transfer ownership and management of Give 5 to United Way. The ordinance allowed the city to transfer up to $125,575 in budgeted funds for the program to United Way, according to council’s agenda for the meeting.

United Way will be responsible for funding the program after the city funds run out, according to the release.

At the city of Springfield, Burris was succeeded in an interim capacity by Assistant City Manager Collin Quigley. He’ll serve until the permanent successor, Jason Gage, starts on Aug. 1, according to SBJ reporting.