SBJ photo by Wes Hamilton
Galloway Creek is underway in the foreground, while Green Circle’s project is getting started up the hill.

Matt O’Reilly is among developers in Galloway Village.
Previous Next 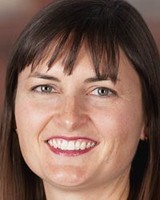 Among them, he garnered his first kiss at Sequiota Park. The area, later in life, offered a popular spot to rendezvous and reconnect, namely at Galloway Station – now known as Galloway Grill – for the longstanding Wild Turkey Wednesday.

“That was the place where everyone would come back for years, the Wednesday before Thanksgiving, and you’d see all of your friends and catch up,” said O’Reilly, the 37-year-old CEO of Green Circle Projects LLC.

“Either the greenway or the creek or Galloway Station or the bike path,” he said of Galloway Village’s unique, eclectic feel, “all those things were reasons to go there. It’s just kind of a little jewel in the middle of town that’s different from everything else.”

The southeast neighborhood is split by Lone Pine Avenue. There, an abandoned railroad and Galloway Creek flank the roadway, as well as the heavily treaded Galloway Creek greenway and pedestrian path.

It winds through Sequiota Park and past a massive quarry, also mingling among a mix of flagship businesses of the once-independent community, such as Creek Side Pub, Galloway Grill and the now-closed Sequiota Bike Shop. Newer additions include 4 by 4 Brewing Co. and Acacia Spa.

“We kind of like to say that people love the place despite itself,” he said. “It floods. It’s got an abandoned rail. There’s obviously the quarry. “There’s a lot of abandoned infrastructure there ... but people still love the place.”

The Quarry Town plan calls for a 100-unit housing complex off Allen Place – built atop a former dump – as well as up to 18 stilted townhomes and roughly 20,000 square feet of combined commercial, restaurant and retail space, the latter fronting Lone Pine. O’Reilly said the town house tally likely would shrink.

The project, for which O’Reilly declined to provide project costs, is only one major development to take shape in recent years for the neighborhood otherwise largely left untouched by expansive growth. According to building permits on file with the city, it’s a $14 million estimate.

Springfield City Council in May 2014 deemed nearly 75 acres of the neighborhood as blight – roughly between the 3400 and 4100 blocks of South Lone Pine – and adopted a redevelopment plan for the area.

TLC Properties President Sam M. Coryell, the developer of Township 28, led the effort by financing $50,000 for a needed blight study, and related engineering and legal work to earn the blight status.

“We always kind of say that property tax abatement probably is not going to make a project work where it wouldn’t work otherwise,” she said, “but it can be really helpful, because it’s basically reducing costs for a developer for a good chunk of time.”

Meanwhile, Kerner said southeast Springfield remains a desirable area for developers, with increasingly fewer projects sites available throughout the city. Developers seem to be moving into areas where costs have otherwise deterred projects, she said.

“People are starting to look at the more complicated sites,” Kerner said. “And I think you see that around town, where there’s kind of funky access. But it’s a good general location, so people are willing to put something in.”

Preservation efforts
O’Reilly said a blighted Galloway Village waived a green flag for developers whose modus operandi often is to arrive, bench-cut the area and build.

He didn’t want the same for Galloway.

“I was kind of scared that Galloway would become a Republic Road, or something like that,” he said, noting he moved on Quarry Town to help develop the area with stewardship in mind. “It was an opportunity, but it was kind of a defensive move.”

Building in the neighborhood, O’Reilly said, is not easy compared with other areas, such as his Famers Park development a bit farther south than Galloway.

“For most of the lots that are left, particularly, it needs the blight district if any economic stability is to be gained,” he said, noting true blight comes via the abandoned railroad, the flood-prone creek, lacking infrastructure and steep, dangerous grades.

O’Reilly said Green Circle Projects also assembled a team of watershed stakeholders – including city staff, the Missouri Stream Team and The Nature Conservancy – to improve the flow of the creek, namely by removing concrete slabs previously dumped in the creek.

“We’re really focused on water quantity and water quality, because that creek – Galloway Creek – is one of the top creeks in town for water quality,” O’Reilly said.

“It’s one of the creeks left that’s not heavily disturbed or affected by urban runoff issues.”

He said the team will continue to monitor the creek as development continues. Green Circle Projects also teamed with the city for a hard-fought easement along the adjacent railway to install a stormwater culvert beneath the tracks for improved drainage. O’Reilly considers the culvert work significant flood infrastructure for all of the developments.

Rather than clear trees, the company designed its project around them, saving significant growth, O’Reilly said, in addition to converting the former dump site into the 100-unit apartment complex.

Next, O’Reilly said he is working with area business and property owners to spearhead a new community improvement district for the South Lone Pine corridor, in hopes of creating an added 1-cent sales tax for neighborhood improvements. Kerner said the needed petition to create the CID has not yet been finalized, so potential council approval of the CID remains several months out.

For Township 28, TLC Properties’ Coryell also felt compelled to preserve the character of Galloway Village – even when he bought the land 10 years ago.

“I didn’t want to go in there and just throw up a normal stack-them-high-and-tight type of product.”