Number of Employees: Sunterra Springs has a total of around 155 employees including Riverview, Independence, Corporate,  and Springfield. We are breaking ground on Sunterra Springs O’Fallon later this year

Sunterra Springs provides transitional rehab services in a luxury setting to patients who are leaving the hospital but aren’t quite ready to go home. “Our goal is getting someone back to their prior level of function – before the stroke, before the knee replacement or whatever trauma that patient may have been through,” says Executive Director Deanna Beckenholdt. Sunterra Springs will open a new rehabilitation facility in Springfield in August 2018.

“One of our mission statements is “redefining healthcare”,” says Beckenholdt. “We’re changing the idea of a traditional nursing home. You come here to get better and go home. You don’t come here to stay the rest of your life.”

“There’s kind of a stigma with nursing homes that we want to abolish in this setting. We want people to come here and feel confident that they’re going to do the best they can. They’re going to rehab and they’re going to go home and be with their loved ones.”

Part of what sets Sunterra apart from a traditional nursing home is that there are no long-term stays and the 38 bedrooms all have private bathrooms and showers. “No one wants to go down the hall to a community shower room,” says Beckenholdt.

Sunterra will also feature a dining room that offers a restaurant-style dining experience. The room is specifically designed to look like a restaurant and not like a cafeteria. There is also a state-of-the-art kitchen where staff can make whatever the residents require or desire.

“There are so many patients that don’t need that traditional nursing home stay,” says Beckenholdt. “They just need somewhere to go for two to three weeks to get really intense therapy and high-quality nursing care and then they’ll be fine. The generations that are aging, they don’t want to go to their mother’s nursing home.”

This will be Sunterra’s second facility in Missouri with another located in Independence. A third facility is in Boise, Idaho. 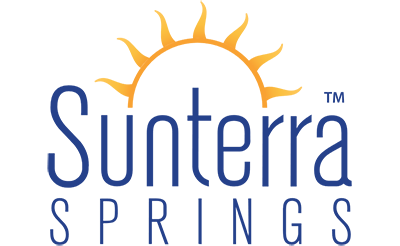