Blog: My Day with the Chamber President

As a total newbie to Springfield Business Journal – I had just started the previous week – I received the assignment to shadow Matt Morrow, the Springfield Area Chamber of Commerce president, for the Day in the Life special feature.

I wasn’t intimidated by the task at hand and was actually looking forward to it. This is a great concept for a feature series, and I saw it as an ideal opportunity to catch a glimpse into what a member of the business community faces on a given day.

While a newcomer to the SBJ staff, I’m not unfamiliar with Springfield, as I’ve been a resident since the 1990s, when I came here from Oklahoma to attend college. I had never previously met Matt prior to May 30, but I did listen to him speak at a Marshfield Area Chamber of Commerce awards banquet last October. As I learned from that evening, he has the gift of gab – a skill that obviously serves him well in his chamber role.

With four to eight speaking engagements a week – a number that would likely make many of us, myself included, break out in a cold sweat – Matt sure seems comfortable navigating that important aspect of his work. Matt succeeded Jim Anderson, who retired as chamber president in 2014. He told me he later learned he beat out more than 500 people for the job, and he wasn’t expecting to be selected.

After seeing Matt’s agenda in advance, I knew it was going to be a busy day. Those aforementioned speaking engagements are just the ones he ultimately was able to fit into his busy schedule, as he says invitations to attend or speak at various events come in daily.

Although it was originally part of his day’s agenda, playing in a scheduled game for one of the chamber’s whiffle ball teams was a late scratch, due to a dinner with Sen. Roy Blunt, Mayor Ken McClure and Missouri State University President Clif Smart coming up last minute. Matt seemed genuinely disappointed to be missing out, as he mentioned it’s a good way to do something fun with his co-workers.

At one point during the day, Alex Greiwe, workforce development coordinator for the chamber, dropped by Matt’s office to talk a little whiffle ball. Matt called Alex the team’s “general manager,” and says she had “unlimited authority” of the team.

“It’s one of the few places that anyone says I have unlimited authority,” Alex says with a laugh, before attempting to recruit me to play.

I respectfully declined the invitation – a decision I suspect was a good thing for the chamber team’s chances at winning.

Matt says he tries to be at the whiffle ball games as often as he can, but doing so is not always easy with his schedule and the fact he receives chemotherapy treatments every other Friday.

Matt’s packed weekly work schedule is being tackled while he battles advanced melanoma. Two days after I shadowed him, Matt went to Hulston Cancer Center for the 12th of 26 scheduled treatments to combat the skin cancer, which was discovered last fall. He had surgery shortly thereafter to remove a larger-than-normal tumor.

“The surgery was successful, and now we’re treating it throughout all this year,” he says, adding the treatments zap his energy – the main physical side effect he experiences. “Normally, what it means for me is that sometime about the middle to the end of the week following treatment, I’ll kind of hit the wall and need to get to bed early or get a couple of naps in.”

Other than a short period when he had surgery last November, Matt says he hasn’t stepped away from work. That’s the sign of a person who clearly loves what he does and the people he works with, which I got to witness firsthand. His rapport with chamber staff was jovial and relaxed. That extended to brief conversations he had with city and state leaders and members of the business community at a tax reform presentation that morning, as well as a luncheon featuring nearly 100 current and former chamber board members.

It was an honor and privilege to be a fly on the wall in witness of those interactions. My thanks to Matt and the chamber staff for the peek inside.

Reporter’s Notebook
Below are a few snapshots I captured during my day with the chamber president. 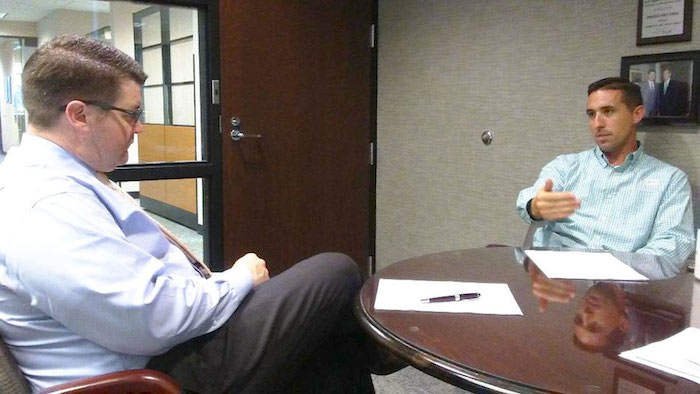 Matt talks economic development with Justin Coyan, the chamber’s manager of business development. The project activity report on the table was filled with numerous prospects for the city — all of them referenced with code names, such as Project Omni and Project Blend. 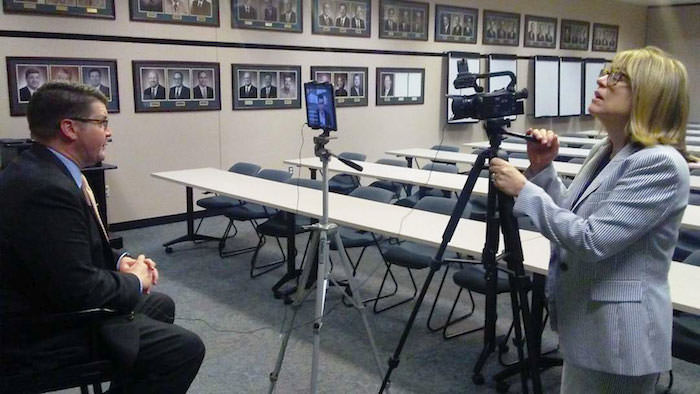 The chamber has been experimenting with two- to three-minute membership videos that will be posted on the organization’s website, with Matt serving as the “host” under the direction of Jennifer McClure, director of communications and public engagement. 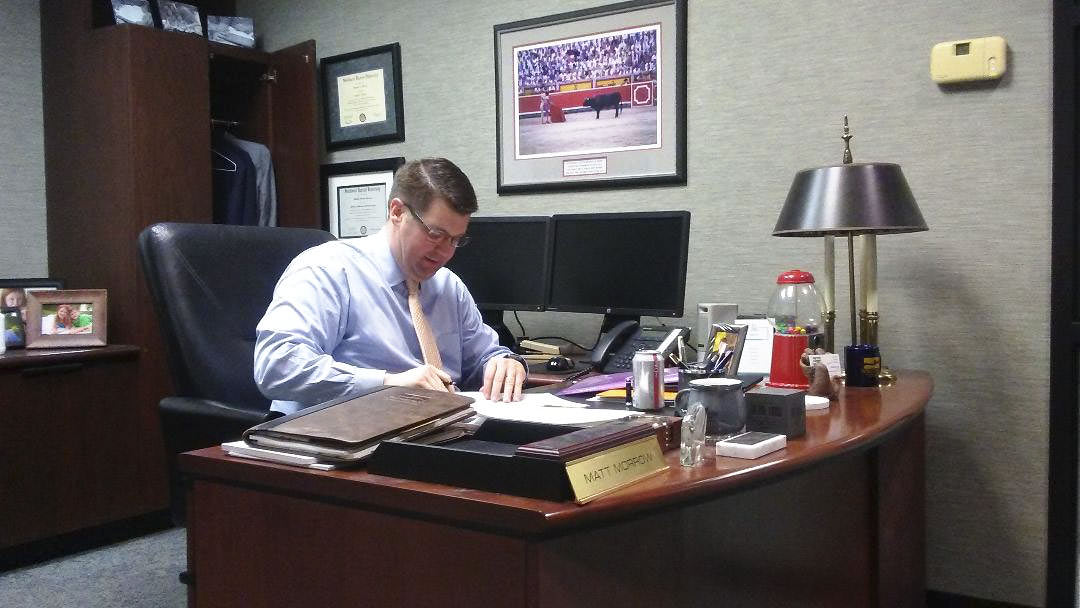 Getting the chance to work on his penmanship, Matt had lots of paperwork awaiting him when he returned to the office after being gone most of the morning.

Blog: Philosophy makes a statement at South and Walnut